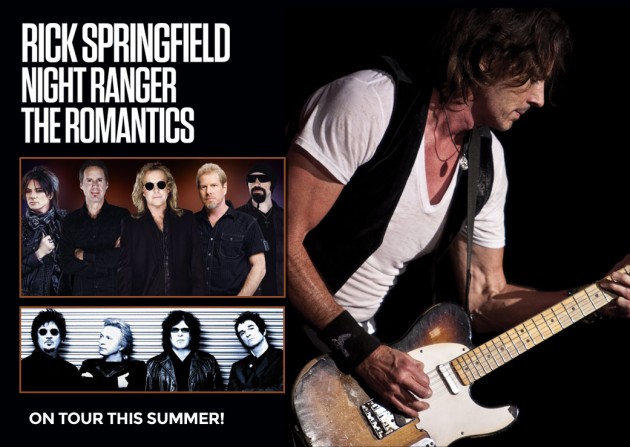 Los Angeles, June 2, 2016 –Grammy award- winning musician, actor and New York Times best-selling author Rick Springfield will hit the road this summer with special guests including Loverboy, Night Ranger, 38 Special, The Fixx, The Romantics, and Tommy Tutone. The tour will be coming to a city near you and playing hits that include “Jessie’s Girl,” “Working for the Weekend,” “Sister Christian,” “Hold on Loosely,” “One Thing Leads To Another,” “What I Like About You,” “Jenny/867-5309” and many more of their iconic songs.

Rick is also offering up a special limited purchased opportunity on the tour: to be his honorary guitar tech for the day. This unique package even includes taking home an autographed guitar from Rick. For details go to: http://bit.ly/RockforRuben. Proceeds will benefit the estate of Rick’s friend and guitar tech, Ruben Velasco, who passed away this week of cancer.

Rick’s fans now have the chance to support a beloved member of his crew and enjoy a rockin’ concert from the stage. The multi-city tour will kick off June 18th in Andover, KS with additional dates thru August in New Orleans, Chicago, Phoenix, Los Angeles, Brooklyn, Raleigh and Charlotte. Tickets for all shows are on sale now. Visit the tour page for ticketing links and more information.