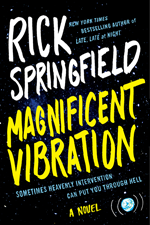 “Why are we here? What is love? Is there a Loch Ness monster? Does God send text messages?” These are the kinds of questions Horatio Cotton, aka Bobby Cotton, asks in Rick Springfield’s first novel, Magnificent Vibration.

After stealing a mysterious self-help book called Magnificent Vibration: Discover Your True Purpose from a bookstore, Bobby calls the 1-800 number scrawled inside the front cover, only to discover that he has a direct line to God. This launches Bobby on a whimsical quest, serendipitously accompanied by a breathtakingly sexy and exceed­ingly sharp travel companion named Alice. Together the pair sets out to find some combination of spiritual and carnal salvation—and possibly save the planet.

By turns hilarious, poignant, over-the-top, and deeply meaningful, Magnificent Vibration is a highly original novel about the biggest questions one man—or mankind—has ever asked.

“The only good grades I ever got in school before I was kicked out were for creative writing. I thought that fiction might be in my future but then my career took a different path once the Beatles showed me what a blast being in a band could be. Writing my memoir Late, Late at Night reminded me how much I love the craft. So I decided to give fiction a shot again. Magnificent Vibration is the result. I’m still not quite sure where it came from, but once I got going, it practically wrote itself. I’ve heard writers I admire speak of that phenomenon, so maybe I’m on the right track.”—Rick Springfield

“This is not the prose of a rock star who decided to try his hand at novel writing, but of a novelist who just happens to be a rock star.”
—Variety

“With shades of The Hitchhiker’s Guide to the Galaxy (1979) and the clever, self-deprecating wit of Augusten Burroughs and Max Barry, Springfield’s highly original work is the rare antidote to the celebrity ghostwritten books…Captivating, poignant, and hilarious, Magnificent Vibration proves that some of the most interesting stories can come from pretty unlikely places.”
—Booklist

Magnificent Vibration is available in hardcover, ebook and audio book (read by Rick) 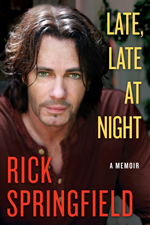 Late, Late at Night is a New York Times Bestseller and was voted as one of the top 25 rock memoirs of all-time by Rolling Stone magazine.

In his searingly candid memoir, Rick pulls back the curtain on his image as a bright, shiny, happy performer to share the startling story of his rise and fall and rise in music, film, and television and his lifelong battle with depression.

In the 1980s, singer-songwriter and actor Rick Springfield seemed to have it all: a megahit single in ”Jessie’s Girl,” sold-out concert tours, follow-up hits that went on to sell over 17 million albums, and 12 million daily viewers who avidly tuned in to General Hospital to swoon over the handsome Dr. Noah Drake. Yet lurking behind his success as a pop star and soap opera heartthrob was a moody, somber, and dark soul, one filled with depression and insecurity. 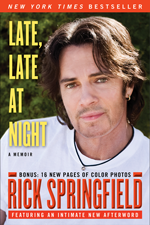 In Late, Late at Night, Rick takes readers inside the highs and lows of his extraordinary life. By turns winningly funny and heartbreakingly sad, every page resonates with Rick’s witty, wry, self-deprecating, brutally honest voice. On one level, he reveals the inside story of his ride to the top of the entertainment world. On a second, deeper level, he recounts with unsparing candor the forces that have driven his life, including his longtime battle with depression and thoughts of suicide, the shattering death of his father, and his decision to drop out at the absolute peak of fame. Having finally found true balance, Rick’s story is ultimately an uplifting one, thanks to his passion for music, a deep love of his wife of twenty-six years and their two sons, and his life-long quest for spiritual peace.

“Many of the things I have had to face in my life are universal issues; my lifelong battle with depression, fear of failure, self doubt and my journey to overcome these. There have been ups and downs in my life, and reaching the milestone of my 60th birthday made me want to tell my story finally and honestly. I seized the opportunity to tell my story in my own words, so those who may be going through similar things in their lives, can take my experiences, grow from them and hopefully have a good laugh along the way.” —Rick Springfield

Late, Late At Night is available in hardcover, paperback, ebook and audio book (read by Rick)