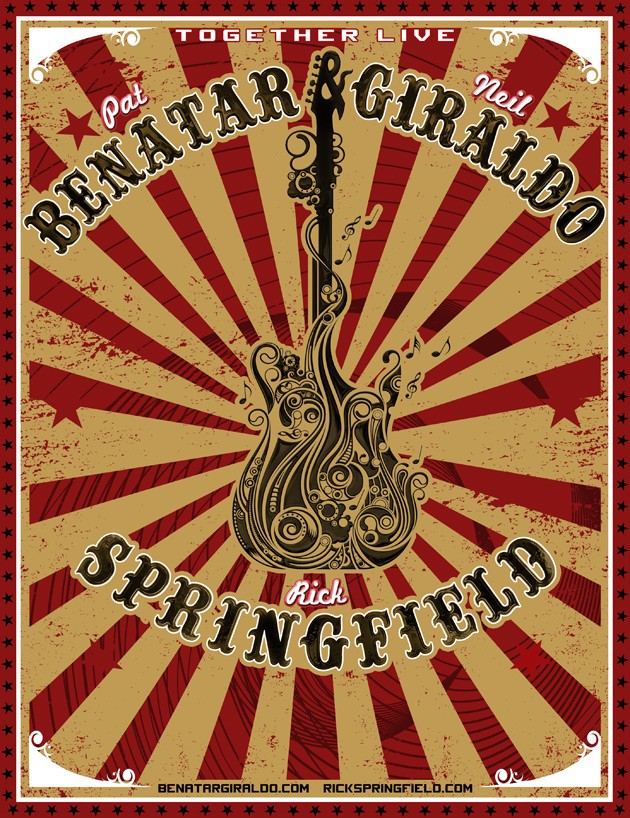 PRESS RELEASE:
Grammy award-winning musician, actor and New York Times best selling author Rick Springfield will hit the road this summer on a co-headlining tour with his friends and fellow musicians, Pat Benatar and Neil Giraldo. The multi-city tour will kick off on June 28th in Atlanta, GA with additional dates throughout July. This tour marks the first time that Rick will tour with Pat and Neil.

The iconic rock star has been touring for more than 30 years and his shows are legendary for their rock heavy, high energy, full band sets. Although Rick has known Pat & Neil for more than 30 years he has never had the chance to tour with them, until now. Springfield says, “Although I first met Pat and Neil when Neil played on the original recording of Jessie’s Girl in 1980 it took 35 years before we got together to tour. It should be one for the books.” Rick’s friendship and working relationship with Neil Giraldo is well documented in his auto-biography, Late, Late at Night.

Rick Springfield will take a break from his own solo tour this summer to co-headline a multi-city trek with old friends and fellow hitmakers Pat Benatar and Neil Giraldo.

Springfield, Benatar and Giraldo will launch the tour June 28 at Atlanta’s Chastain Park Amphitheater with additional dates in July including stops in Atlantic City, Kansas City and Phoenix.

“I always thought it would be a kick ass tour with the boy/girl thing and us both having high energy rock and roll shows,” Springfield says. “I am very excited for the dates. We both have a big catalog of familiar songs so I think the audiences will definitely get it.”

Rick adds, “I remember hearing ‘Heartbreaker’ on the radio around the time I was writing my first album (“Working Class Dog”) so it’s a kind of complete circle thing. And we both recorded at Sound City with Keith Olsen.”

Following the first date in Atlanta, other stops will include Raleigh, Atlantic City, Canandaigua, Cincinnati, Kansas City, Mulvane, San Diego, Phoenix and Saratoga with plans for additional tour dates to be added.