Rick in the New York Times 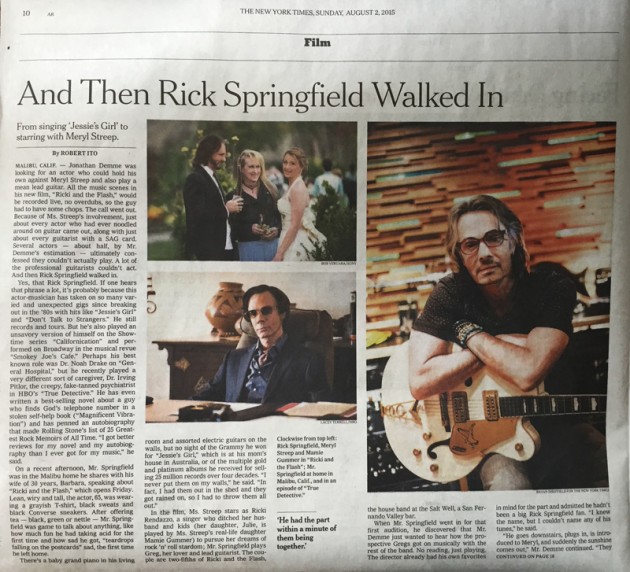 Rick was featured the Sunday edition of the New York Times on August 2 in an article titled “And Then Rick Springfield Walked In” about how he came upon winning the role opposite Meryl Streep in the move “Ricki and The Flash.”

Check out an excerpt and a link to the full article below:

By ROBERT ITO JULY 31, 2015 / NEW YORK TIMES
MALIBU, CALIF. — Jonathan Demme was looking for an actor who could hold his own against Meryl Streep and also play a mean lead guitar. All the music scenes in his new film, “Ricki and the Flash,” would be recorded live, no overdubs, so the guy had to have some chops. The call went out. Because of Ms. Streep’s involvement, just about every actor who had ever noodled around on guitar came out, along with just about every guitarist with a SAG card. Several actors — about half, by Mr. Demme’s estimation — ultimately confessed they couldn’t actually play. A lot of the professional guitarists couldn’t act. And then Rick Springfield walked in.

Yes, that Rick Springfield. If one hears that phrase a lot, it’s probably because this actor-musician has taken on so many varied and unexpected gigs since breaking out in the ’80s with hits like “Jessie’s Girl” and “Don’t Talk to Strangers.” He still records and tours. But he’s also played an unsavory version of himself on the Showtime series “Californication” and performed on Broadway in the musical revue “Smokey Joe’s Cafe.” Perhaps his best known role was Dr. Noah Drake on “General Hospital,” but he recently played a very different sort of caregiver, Dr. Irving Pitlor, the creepy, fake-tanned psychiatrist in HBO’s “True Detective.” He has even written a best-selling novel about a guy who finds God’s telephone number in a stolen self-help book (“Magnificent Vibration”) and has penned an autobiography that made Rolling Stone’s list of 25 Greatest Rock Memoirs of All Time. “I got better reviews for my novel and my autobiography than I ever got for my music,” he said.