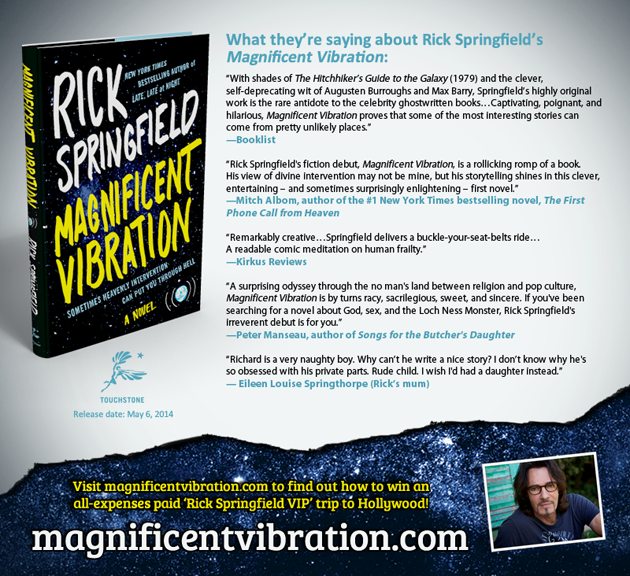 “With shades of The Hitchhiker’s Guide to the Galaxy (1979) and the clever, self-deprecating wit of Augusten Burroughs and Max Barry, Springfield’s highly original work is the rare antidote to the celebrity ghostwritten books…Captivating, poignant, and hilarious, Magnificent Vibration proves that some of the most interesting stories can come from pretty unlikely places.”
—Booklist

“Rick Springfield’s fiction debut, Magnificent Vibration, is a rollicking romp of a book. His view of divine intervention may not be mine, but his storytelling shines in this clever, entertaining – and sometimes surprisingly enlightening – first novel.”
—Mitch Albom, author of the #1 New York Times bestselling novel, The First Phone Call from Heaven

“A surprising odyssey through the no man’s land between religion and pop culture, Magnificent Vibration is by turns racy, sacrilegious, sweet, and sincere. If you’ve been searching for a novel about God, sex, and the Loch Ness Monster, Rick Springfield’s irreverent debut is for you.”
—Peter Manseau, author of Songs for the Butcher’s Daughter

“Richard is a very naughty boy. Why can’t he write a nice story? I don’t know why he’s so obsessed with his private parts. Rude child. I wish I’d had a daughter instead.”
—Eileen Louise Springthorpe (Rick’s mum)