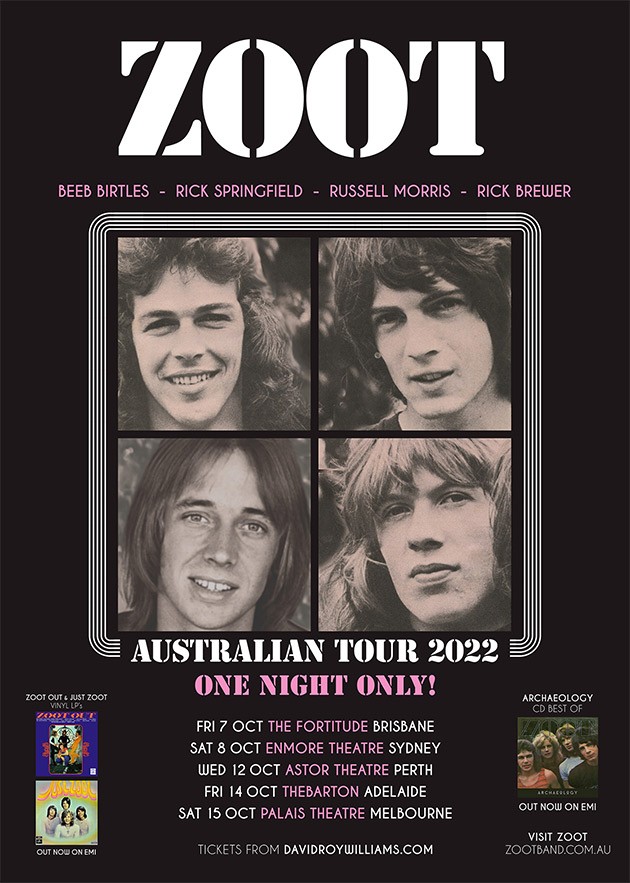 It is with much sadness and disappointment that we must announce that the Zoot tour of Australia is cancelled. Much has changed in the two years since we announced the tour, and individual members of the band, whilst excited about the potential offered by the tour, are now unfortunately not in a position whereby they can move forward with the tour as scheduled. Rather than postpone the tour yet again, the decision has been taken to cancel the tour and refund all ticket holders.
It may be that the tour can be rescheduled in the future, and if so, we will notify all of new dates.
Current ticket holders will be contacted with refund information within the next three days.

ZOOT took Australia by storm in the late 60’s with a string of hits, including ‘One Times, Two Times, Three Times, Four’, ‘Monty and Me’, ‘The Freak’, and their blistering cover of The Beatles’ ‘Eleanor Rigby’. Crowned Australia’s Best Group in Go-Set in 1969, the band broke up in 1971 with all members going on to stellar careers. Beeb Birtles was a founding member of Little River Band, Rick Springfield became a solo star in the US, and Rick Brewer joined The Ferrets. Darryl Cotton had a successful solo career in Australia before joining up with old pals Russell Morris, and Jim Keays in Cotton, Keays and Morris. Darryl passed away on 27 July 2012.

“This whole tour is about honouring Darryl Cotton and ZOOT,” Rick Springfield reveals. Russell Morris says the tour will be a labour of love. “I am not trying to be Darryl,” Russell points out, “but as I worked with Darryl for so long, he is a part of me. I know how much he cared about ZOOT, so I will give it my very best.”

The reunion represents ZOOT’s first Australian shows in over 50 years and follows the release of the ZOOT anthology, Archaeology as well as vinyl reissues of Just Zoot, and Zoot Out.

“Who would have thought we’d still be performing ZOOT songs 50 years after the release of Just Zoot,” smiles Beeb, who started ZOOT in Adelaide with Darryl Cotton. “Nevertheless, here we are with ZOOT in 2021, and with some amazing shows coming in 2022!”

Visit the davidroywilliams.com for ticket links!